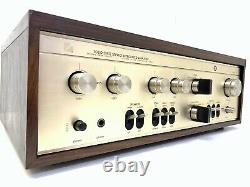 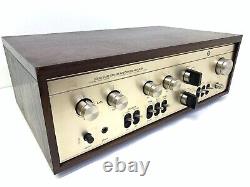 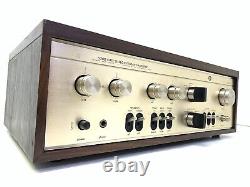 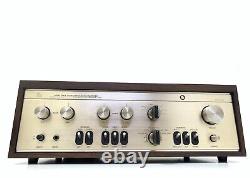 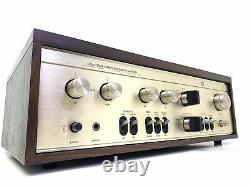 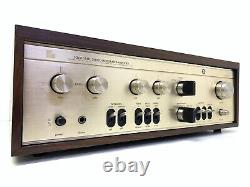 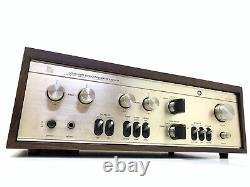 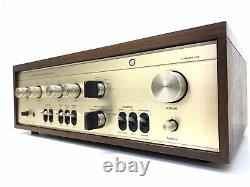 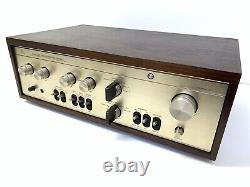 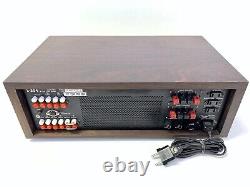 WORKING PERFECT - on 100, 120 Volts or 220 and 240 Volts (with EXTERNAL TRANSFORMER included for FREE). 78,000yen (October, 1973 release). The Integrated Amplifier announced as a SQ-505 type succeeding machine. The main-amplifier part is designed for the purpose of removing crossover distortion in which it is difficult to remove with B class push pull amplifier, and the notching distortion especially in a high region as much as possible.

The PNP type and NPN type transistor which were excellent in the high region property were appointed as B class driver stage, and the power transistor for pure complimentaries which was developed for LUX and which was excellent in the destructive-proof property which does not spoil a high region property is adopted as the power stage. By adopting the differential-amplification circuitry by constant current drive, and driving from a non-signal time with a fixed electric current till the maximum output, the pre-driver stage maintains B class operation stage at the status that it was stabilized, and is suppressing notching distortion to the relative minimum. The transistor of this stage has high high region cut-off frequency (ft), especially, few things of the collector output capacitance (Cob) were adopted, and the distortion of the high region has also acquired the almost same value as 1kHz over full power. All the transistors currently used for a main-amplifier part arranged the can type, and have secured moisture resistance, an endurance, and hi-reliability. The gentle LUX scheme NF type of a transition property is used for a tone control circuit.

The equalizer circuitry has obtained the linearity and high SN ratio which are a 3 steps of?? Hardwired-connection circuitry which is a stream composition, and were excellent in the super-low-noise type transistor of NPN-PNP-NPN with an advantageous voltage utilization factor. Distortion has acquired the outstanding numerical value, when a current amplification factor (hfe) adopts a transistor with a sufficient linearity highly. Direct-current stability is raised fully applying a direct-current feedback to this circuitry. Moreover, the deflection with a RIAA curve is dedicated to less than?

0.5dB by making the allowable error of a using small part and suppressing variation as much as possible. It is used for the capacitor used for an input circuit and an output circuit from the inside of a Mylar type with little leakage current, and a tantalum type, carefully selecting it further. This is holding down the unpleasant shocking noise at the time of a switchpoint switching to the relative minimum. Two 6800-micro F electrolytic capacitors are used for the filter circuit of a power-source part. The stable power source is realized in combination with the good power transformer of a regulation.

Power-switch ON and the muting circuit which separates a speaker circuitry at the time of OFF are prepared in the measure against a shocking noise at the time of power activation and a shutdown, and the duty of the speaker protection is also achieved. Two speaker outputs, a main and remote, are carried and it can be used separately or simultaneously. The Attenuator switchpoint is carried and a sound volume of -18dB can be carried out with a one button. Succession effective output35W+35W (8 ohms, both channel simultaneous operation). 40W/40W (ohms [8], one-side-channel operation).

Power consumption150W (at the time of an 8-ohm simultaneous load intensity and the maximum output). DimensionsWidth 450x height 160x depth of 268mm. Hardwired-connection circuitry which is a stream composition, and were excellent in the super-low-noise type transistor o.

2 X 35 Watts RMS. This item is in the category "Consumer Electronics\TV, Video & Home Audio\Home Audio\Receivers & Amplifiers\Amplifiers & Preamps". The seller is "technogold" and is located in this country: ES.