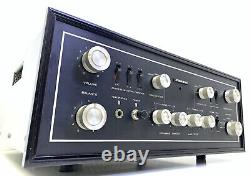 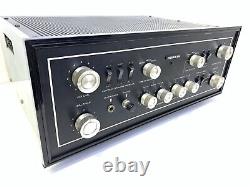 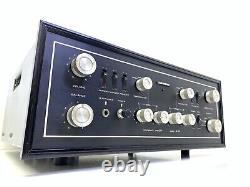 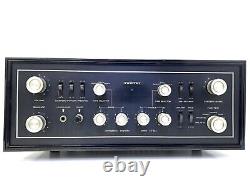 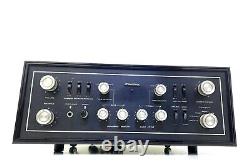 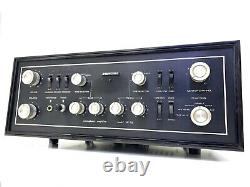 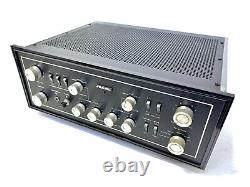 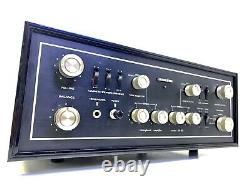 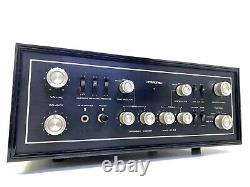 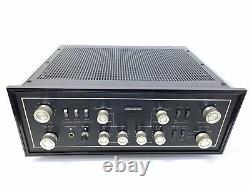 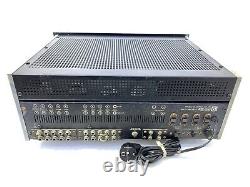 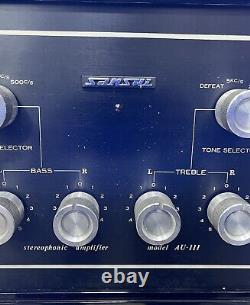 As being Sansui's tube gear tradition, this amplifier was designed to strive for the maximum capability of 6L6-GCs with 485V plate voltage yielding 40W + 40W RMS Stereo Power with less than 0.8% THD. The control amp section consists of the cathode follower first stage followed by three amplification stages to manage sophisticated tone controls, Low/high filters, loudness and presence switches although the tone control circuit can be totally bypassed by the tone defeat switches. The phono equalizer stage adopted the solid-state circuit to improve S/N in the low level input. The AU-111 was initially introduced in 1965, and was on the market at least until 1971.

There were five known revisions, and the first generation of the AU-111 on the back ground is the rarest of all with the distinguished control knobs that were built in two parts. AU-111 started Sansui's black front panel tradition that was continued more than two decades well into 1990's. AU-111 also contributed to establish Sansui's reputation as one of the best audiophile manufacturers in the world. About the end of tube technology era, AU-777 was introduced as Sansui's first solid state integrated amplifier in 1967 followed by AU-222 and AU-555 although AU-111 was still going strong even into the early 1970's. It was very ironic that at the very end of Sansui's high-end audiophile history, Sansui reintroduced AU-111 as AU-111 Vintage in 1999 followed by AU-111G whose control section was redesigned to be suitable for SACD and DVD-Audio applications. Ichiro Ohshima who was the high-end product manager at Sansui since 1986 to 2000 mentioned that he used to enjoy AU-111 and JBL speakers combination when he started working for Sansui. About at that time, he was wishing to create amplifiers sounding like AU-111 in his career.

During the rough time Sansui went through from the late 1980's to 1990's, Mr. Ohshima was the one who struggled to maintain the Sansui's high-end amp tradition. Many of his master pieces, from AU-X111 MOS Vintage to AU-Alpha Series, indeed sound similar to AU-111.

This item is in the category "Consumer Electronics\TV, Video & Home Audio\Home Audio\Receivers & Amplifiers\Amplifiers & Preamps". The seller is "technogold" and is located in this country: ES. This item can be shipped worldwide.