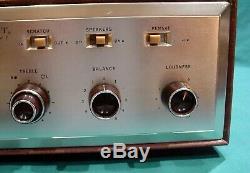 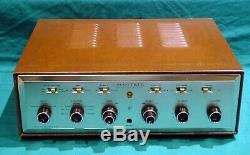 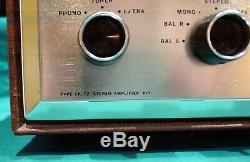 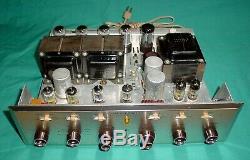 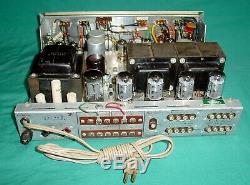 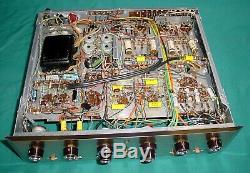 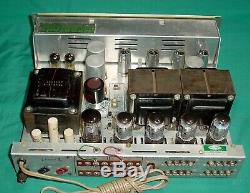 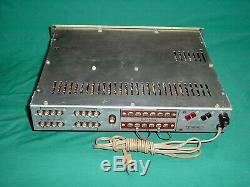 I offer for your consideration, an HH Scott LK-72, Late Version Stereo Integrated Amplifier. It is essentially an LK-72B. I bought this amplifier many years ago and finally got around to getting it going. If you know Scott tube amplifiers, you will already know that this is a very late edition LK-72, which is very similar to the next edition; the LK-72B. What makes me say that?

Location of the bias bridge. Layout of the front controls.

So, what did I do to get this amplifier working? First thing, I tested the first electrolytic capacitor after the GZ34 rectifier. It was not up to the task, being leaky at 350 VDC so it got replaced with a fresh JJ electrolytic. I also tested the coupling capacitors to the grids of the 7591 output tubes for value and leakage. They passed with no problem. So, they were left in place. Some of the other coupling capacitors had splits in the case, so they got replaced. Also, the Siemens Selenium Bias Bridge was not passing enough voltage, and the bias for the output tubes was down (as was the filament voltage for the preamp tubes).

There was an issue of the right channel dropping out. Voltages were not where they should be so I replaced, one by one, the components around that 6U8 but to no avail. Remember, this was a kit. It was not factory wired. If I wiggled that tube, the signal would come and go.

FINALLY, I found one wire that was not soldered by the kit constructor. A flowed joint; problem solved.

Now, the amplifier was sounding very nice. Tubes had been pilfered as usual when I got it. There is a compliment of USA manufactured 7591 tubes (Sylvania, if I remember correctly), which tested very, very good. Rectifier is European, not Chinese and the phase inverters are NOS USA manufacture.

Cosmetics are not that bad. No doubt, this is a 1963 Kit. That was over 50 years ago! I doubt that the engineers at HH Scott ever expected these amplifiers to still be in use.

It is just too risky today. I want you to be happy. Also, all tubes are in place. So you won't have to disassemble it to use it.

But there is a blue piece of Styrofoam inserted to keep the output and rectifier tubes in place. You MUST remove it before using the amplifier. There is a reminder in the box to that effect. The item "HH Scott LK-72 Late Essentially An LK-72B Stereo Tube Amplifier Working" is in sale since Saturday, September 19, 2020.